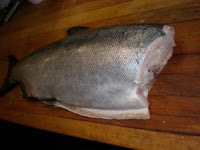 My Northwest guy called and said a "day boat" loaded with Ivory King Salmon just got in. It will be at my door tomorrow. Might as well do some razor clams while we're at it. The Ivory King is indeed a rare treat. Reprinted article about the Kings below.

Organic asparagus is still be harvested as well as gorgeous organic baby spinach. Look for soups, salads, side dishes and more. I did a cream-less puree style asparagus soup last week that was killer and sold like hotcakes.

Catching a white king salmon is a treat. The fish make up less than 5 percent of her catch, and many of her East Coast customers covet the variation of the great king.

"I have a lot of chefs who would like me to send them nothing but white king salmon," said Tuttle of Rose Fisheries in Sitka. "On the West Coast, if they accidentally get one, they don't like it."

Michael Mullen, sous-chef at Harry's Savoy Grill and Ballroom in Wilmington, Del., loves to see them in the mix.

"The different color ... it's intriguing," he said. "The ivory seems more special around here; nobody here uses white king."

People across the board -- even in Alaska -- seem to love them or hate them, said 10th and M Seafoods' Dannon Southall.

"We've got a few select people who love them and want us to hold on to them," he said. "Then we have some who come in and say, 'What the heck do you have here?' Some stores think they have some kind of disease. If they've not seen them before, they freak out. But if they know about them, they drool over them."

Over the past couple of years, especially, white king salmon has become a much-awaited culinary delight for many salmon lovers. Unfortunately, fishermen can't offer their customers a steady supply of the fish.

On the surface, the white kings look exactly like any other king. Like a Cracker Jack prize, you don't truly know what you have till you open it up.

Salmon of all types get their pink and red flesh through a pigment called astaxanthin, a member of the carotenoid family. Astaxanthin is found at various levels in most sea critters. It's what makes lobster shells red, for example. It's also found in shrimp, krill and algae, which are good dinner fare for salmon.

White kings should not be confused with being an albino, which would affect the coloration of the skin and eyes.

White kings make up only about 5 percent of the total king population, said Randy Rice, a biologist with the Alaska Seafood Marketing Institute. They are found primarily in Southeast Alaska waters, though a few have been reported in the Pacific Northwest and western Canada.

Fishmongers never know how much white they'll get, if any. A 1,300-pound king salmon shipment to 10th and M in late May had 200 pounds of white kings, Southall said. Other days, the store may get one white in an entire shipment.

White kings are touted as a milder, more delicate fish when compared to their redder counterparts.

"They do taste different," Southall said. "They're richer in taste. You can definitely tell the difference. I love 'em."

Research has shown that there are no significant differences in muscle compositions of moisture, protein or lipid.

White kings haven't always been so easy to sell. Tuttle said that a few years ago, she would get up to 60 cents less per pound compared to the typical red king. So she used to keep them for herself. That won't fly anymore.

Her customers have to come first. Sous-chef Mullen is among the grateful.

"The ivory king cooks up nice," he said. "It stays together a bit more than the red."

One of his favorite dishes: pan-seared ivory king wrapped in a nori wrap.

It offers a beautiful color contrast, he said.

Asked if the kitchen had ever served white and red king in one dish, Mullen said, "No, but that's not a bad idea. Hmm, I'm thinking of a couple of combinations right now."