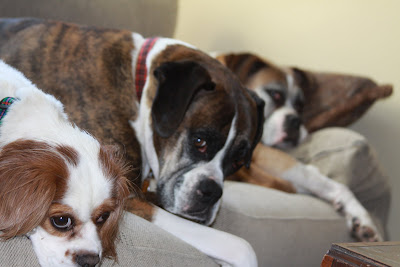 Our three boys chillin on the couch.

Winston, a rescue is a 3 year old King Charles Cavalier Spaniel. He's our newest edition. Rippy, who's official name is Rip Surf Pipeline, is an eight year old brindle boxer. We've had him since he was about a year old. Buster is far right. Another Boxer. We've had him since he was a pup. The most amazing dog I have ever known. He was diagnosed with cancer on August 25th. The Vet told me his life would be measured in weeks. He doesn't know Buster. He'll be ten next month.

Buster used to let himself out of the house all the time. He would stand up, grab the door knob with both paws, turn it and walk backward to open the door. On several occasions he climbed out of kennels. I took him to a kennel one time and told them that he will get out if they're not careful. They said, "we've dealt with clever dogs before". I said, "they are amateurs compared to Buster". When I picked him up they agreed. The girl said, "he kept getting out so I watched to see how he was doing it". He would go in the corner where he figured he'd have the best leverage and climbed, pulling himself up with his front paws and pushing with his back paws. The pads on his feet clinging to the chain link fence. Over the years I've seen him do so many incredible things I can't keep track. I will miss him immensely.

That couch is kinda the dog couch. My wife won't sit on it but I consider myself one of the pack so I chill on it all the time. And the boys don't like it when I do. Except for Winston, he still fits.
Posted by Salty at 5:29 AM No comments: Links to this post


Some of you may know I spent 10 years working as a professional firefighter in the city of Milwaukee. From 1988 through 1998 I worked in some of the busiest fire houses in the city. It was a hectic time for me and the department which set records for the number of fires and medical runs. During this time I also worked at two restaurants and started a catering business. Until now I've only posted one other experience on the department. That one is called "Carbon Moment", my recollection of a memorable fire. I try to keep this blog centered on food and the biz but as the blog description indicates it's half jokingly about therapy as well. (Not that I need it, muhaaahaha!) My experiences on the fire deptartment contribute to who I am and how I operate so I'll occasionally throw a fireman story in here. I've made a conscious decision not to reflect too often on my history as a firefighter but this particular subject haunts me to this day. There are a few experiences I try and lock away in that closet in the back of my mind but this one manages to sneak out too often. It is with that in mind that I write about it. It is not easy.

It was about 15 years ago. I was working at Engine 23,a medium busy engine company on the south side. In Milwaukee the engine companies respond to emergency medical calls, everything from hemorrhoids (I kid you not) to homicides. We are all trained as EMTs and some firefighters as paramedics. In fact, the majority of our runs are medical emergencies.

It was a pleasant evening not long after dinner and the dishes were done that we got a run for a possible GSW. (Gun shot wound) We arrived at the location in a decent neighborhood comprised of newly built town-homes. It's rare we get called for GSWs in nice neighborhoods so this was strange from the beginning. Even rarer was that a Milwaukee police squad was already there. 95% of the time we beat them in. The boss, a fellow firefighter and I jumped off the rig, grabbed our gear and headed into one of the new town-homes. As we entered we couldn't help but notice the smell of cordite, most commonly reffered to as gun powder. Someone fired at least one gunshot in this place and not long ago. (anxiety level raised)In the family room was a Milwaukee cop struggling with a man in his later twenties dressed in casual clothing. The man was wailing a sorrowfull scream while trying to enter the bedroom. The cop held him back as I entered the bedroom followed by the boss and the other firefighter. What we saw stunned us. We all paused for a moment taking in the sight that lay before us. On the bed was an apparent young women with a shotgun between her legs with the butt of the gun at the foot of the bed. She was wearing relatively new tight fitting jeans and a neatly pressed button down blouse (Weird the things you notice while your mind trys to comprehend the sight). She was half sitting with pillows propping her up. She had apparently just fired the shotgun into her mouth. The wall behind her was covered with blood and brain matter in a three foot pattern that reached to the ceiling. The only thing that remained of her head was part of her lower jaw. For an instant I considered checking for a pulse. More out of habit than anything else. It was obvious the woman was dead. I repeated the prayer in my head that I always recite when I'm confronted with death. I'm not religious but it's something I started doing early in my career. The boss broke the silence when he quietly miked his radio and reported to dispatch "engine 23,10-99". Department code for DOA. I stood there and briefly looked around the room and spotted a photo of the victim and her boy friend on the small table next to the bed. She was an attractive young woman with an athletic figure and brunette hair. The man wailing and struggling with the cop was the boyfriend in the picture. Soon the place was filled with cops. We then learned the victim was a police officer for a near north suburb of Milwaukee and her boy friend was a Milwaukee cop. After senior members of the police department arrived we left in silence and didn't say a word the entire ride back to the engine house. Usually after intense situations we decompress with sick humor or small talk. Not this time. We were speechless and remained speechless the rest of the night. We were not talking about it. I guess we were thinking about our wives or girlfriends. I know I was.

I ran into that boss a couple weeks later when I was visiting another firehouse. He confessed to me that that run got to him more so than any other in his career. I agreed that it was still haunting me as well. For the rest of my time on the job when I ever I ran into him we wouldn't talk about the experience but I knew when he saw me and when I saw him we were both reminded of that night. It is still that way today and probably always will be.

For me it's more difficult dealing with death when the victims are young and female. Maybe because I have an attractive wife at home and a young daughter. Death is hard enough to deal with, what's worse is experiencing the agony and sorrow of the friends and family who are present. It's at a time when it's most acute, when they first realize their loved one is dead. It's not a nightmare, nothing can be done, it's final. Things will never be the same again. I've had to endure peoples anguish hundreds of times over. I never got used to it. I don't think anyone does. It's one thing about that job I don't miss.

If I can truly forget some of those memories that occasionally sneak out of that closet I'd be much better for it but I know that will never happen.
Posted by Salty at 10:30 AM 1 comment: Links to this post