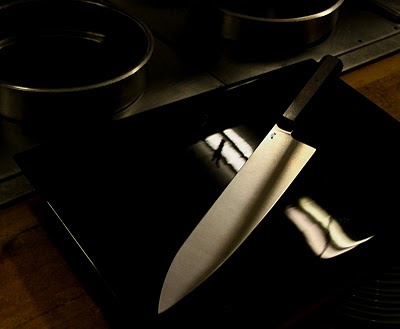 Devin Thomas Knifeforum's Prototype
(You can click twice for close-ups)

Mark at Chefknivestogo sent me the Devin Thomas Knifeforums prototype knife to try out and share my thoughts. This knife was conceived and designed by some folks over at the knife forums. This is the prototype of a production knife that shares the qualities of a custom. It is currently in production and will be marketed by chefknivestogo.com. A Madison, Wisconsin based internet knife merchant. The knives are being made by Devin Thomas. A highly skilled Nevada based knife maker. They're referred to as "mid tech" knives. Meaning some of the process is done by other people other than the "bladesmith". The process and standard shape help keep the cost down.

Aesthetically the knife has a serious, no nonsense look to it. The bright hazy finish on the blade contrasting nicely with the dark cocoblo handle. The only ornament on the blade is the simple "Devin" mark. The octagon handle was a pleasant surprise. I prefer "D" handles because most octagons are too small for me. The handle is large and fills my grip nicely. It's also a little taller than most octagons. A very clean and seamless junction between handle and machi as well. The spine, choil and agi are all rounded and smoothed. The look and feel of a custom. The balance point is about a 1/4 inch in front of the machi. The knife weighs in at 232 grams. It has some heft to it and is a sturdy knife. I think the knives's other measurements have been documented on the forums so I won't bother with them for now. The spine tapers to a thin flexible tip and sturdy edge. 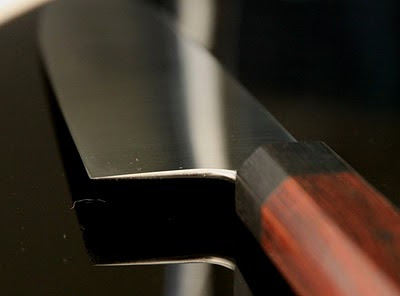 I sharpened the knife as usual and gave it a test ride. I have several videos on my youtube channel featuring the knife. (Saltydog55252) I had a feeling this knife was going to have promise. I know Devin makes a killer knife and was confidant this one would be no different. It screamed through a tomato. I posted a video of slicing a potato and immediately after slicing a tomato and it felt no different. That gives me reason to believe edge retention will be excellent. The thicker handle and well balanced blade gave me a feeling of confidence when slicing and dicing. The blade also has enough balls to slice squash. I did a video of slicing the squash much like I did the potato but it got lost in cyber space somewhere. Using the heel portion of the blade I was able to rapidly slice the neck of a butternut squash. The results were almost identical to the potato. Many of the knives qualities remind me of my Kramer, substantial blade and handle, superb fit and finish, strong yet flexible steel and well balanced. They both also get real sharp.

I didn't take part in the discussion or design of the knife because I had no interest in it. So I'm not familiar with the details of the design. For me personally, I'd bring the tip up a little bit. Some features about the cutting edge I really like is the near flat six inches starting at the heel. There is also a secondary straight (relatively) edge about an inch from the tip. A very nice feature. It gives this fairly big knife agility. 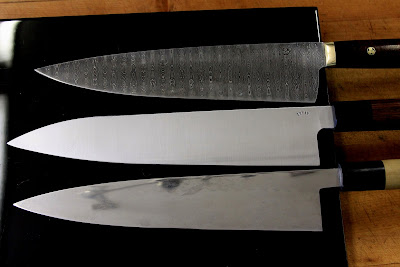 The steel is AEB-L,(I think) It's a stainless steel. 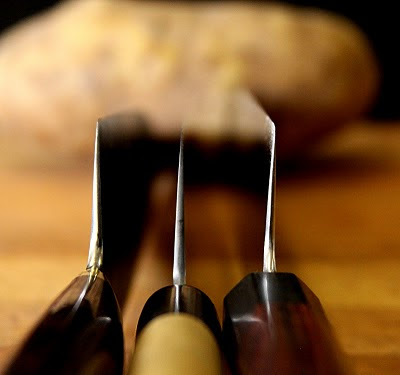 As far as performance goes, this knife is easily competing with customs costing three to ten times as much. I compared it to two of my best performers (Kramer and Masamoto) and it bested them. Yep, that's right, at this juncture I'm going to have to be honest and say it out performed both my Kramer and Masamoto. Both of which I had sharpened and ready to go for comparisons. My Mizuno wasn't sharp so I didn't compare it. That would have been interesting. It sharpened with no hassles, not leaving much steel behind and obtained a super edge.(see videos)

Botton Line, I'm going to have to get me one of these. Dollar for dollar it may be the best knife I've handled. I understand that's saying a lot. 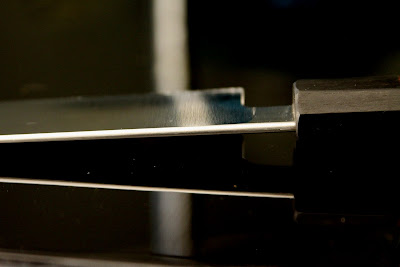 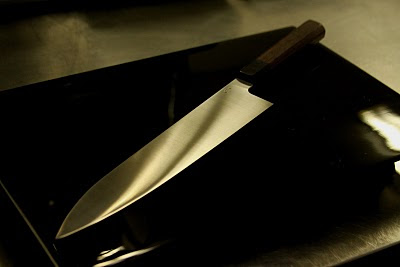 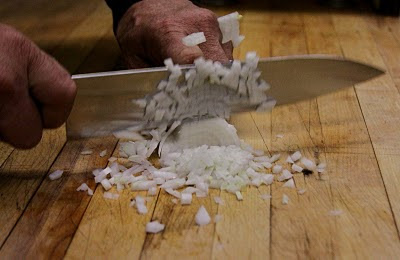 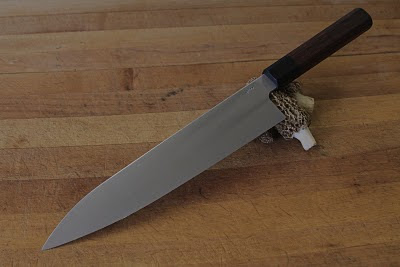 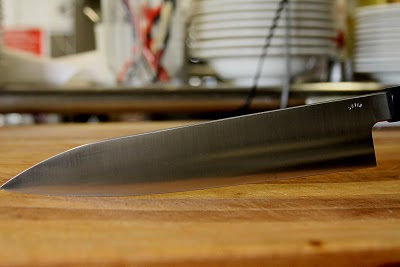 There's that sweet spot I talked about near the tip.
Posted by Salty at 7:04 AM 5 comments: Links to this post