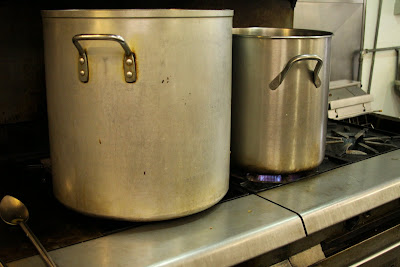 
After everything is said and done and the dust has settled I declare victory. It wasn't a lopsided win but a long fought brutal battle.

What most people don't understand, including my wife and staff is how hard it is to pull a night off like NYE. We serve a fixed price four course menu. Within each course you have four choices. It's a mixture of some regular menu items and completely new dishes. The regular menu items tend to be in the salad department, I didn't want to worry about them because I knew I'd have my hands full with entrees. On a normal night most people will have only 2 or 3 courses and we'll do half as many people as we did on NYE. So we're going to increase our work load by 300% and do it with a completely new menu and no training.

Then there's forecasting. An art in itself. How many people are going to have what? With no history with this menu it's an educated guess and then you leave yourself some breathing room. I knew the filet would be the top seller but I thought the pheasant would be number two. It did'nt sell well. I mean, a boneless pheasant breast for the same price as halibut or or a small filet? I'm all over that. Lobster sold surprisingly well. Surprising because we were charging an additional eight bucks for it. But then again, where are you going to get a four course dinner that includes an eight to ten ounce tail for $56? I was surprised because people around here don't think of value, they just care about price. The citrus shrimp cocktail sold surprisingly well and luckily had just enough. We ran out on the last order. Conversely I'm sitting on a lot of fresh halibut that I'm going to have to move. I knew I over ordered on the fish but I was paranoid about running out. As for the vegetarians? We served two. I'm glad I didn't waste too much time prepping that item. The sorbet sold surprisingly well. I didn't think there would be so many takers on a 15 degree night.

The good news is we didn't have to prep in the middle of the night. If we did, we'd be toast. And thank god I had one cold app. Efficient to put out and no stove space. That single menu item may have saved the day for us. That and the soup, sold the crap out of the crab bisque as well, I will remember that in the future.

In short it's like opening a new restaurant on the busiest night of the year with a staff that has had no training. Purchasing, prepping and serving in the blind.

We pulled it it off. It wasn't pretty but we made it relatively unscathed. It was hard. Real hard. Other than substituting the soup at the last moment we didn't run out of anything. Although we had to sub the tuna on a salad because my fish company no showed. (Thanks Fortune Fish for fucking me over on NYE.) We didn't have to re-prep anything during the night either. I hate to have to pat myself on the back but the task was monumental. As challenging as anything I've ever done. (This coming from a guy who used to crawl into burning buildings) I had to micro manage each station while holding down my own. It's the only way it can be done. I don't know of anyone capable of doing what I did yesterday. I am completely drained and spent. I find I have no patience and am in a surly mood. Probably because no one recognizes the feat I accomplished. No one has a clue. I should be used to that by now.

P.S. I also managed the reservations for the night, mapped and planned seating continually for the last week trying to maximize tables without over loading the servers or kitchen and at the same time trying to hit a goal of number of guests. (We hit it.) Not an easy task in itself.
Posted by Salty at 7:41 AM 3 comments: Links to this post