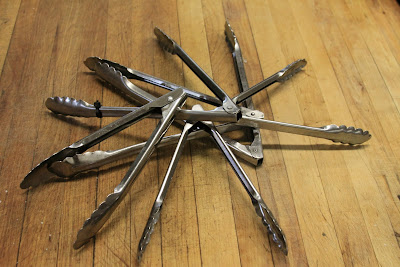 I'm guessing over 95% of all professional cooks in this country use "white trash tongs". Most of the cooks in this country don't have the luxury of having a battalion of chefs hunched over plates making them "wonderful" (and room temperature). Professional cooks are faced with a challenge every day and they want to get it done as easily as possible. The tool of choice for a long time has been the cook's tongs. They come in varying lengths, styles and thickness. It is an indispensable tool in my opinion. It seems the fresh crop of chef's have been taught it's a mid-evil instrument that will ruin the food and it should be banished from the kitchen! I say, learn how to use it, then decide for yourself if it's the right tool.

When my mentor Claus Bienek first came to this country he would scoff at my use of the tongs. It took him three months to accept the fact they were a useful tool. You have to know how to use them and respect the product. To ban them is ignorant.

Cooks have a fondness for their tongs. In just about every kitchen I've worked in guys had their favorite tongs. Some were heavier duty, some were longer, some locked, some spread wide while others didn't open as much. Some guys would hide their tongs at the end of the night just to make sure they would be able to use them next shift. Hey, whatever makes you comfortable.

I've used the term "pussy tongs" referring to cheap flimsy tongs or real long ones to keep your arms away from the heat but that's not the same as disrespecting the majority of professional cooks in this country. Cooking is cooking whether it's in some trendy joint in New York or a supper club in Oshkosh, Wisconsin. Nothing makes one better than the other.
Posted by Salty at 8:01 AM 3 comments:

To Michael, what ever the fuck your name is........Dude, I may use "white trash tongs" but you can bet your ass that when it's go time I'm showing up and have been for a long, long, time with my tongs. You elitist piece of shit.

White trash tongs refers to the old school traditional cook's tongs. In today's modern kitchens they are often banned by the elitist young chefs who have been taught they damage the product. It's true but only in the hands of a journeyman.
Posted by Salty at 6:09 PM 5 comments:

Chopping an Onion in the Dark

A little slow but with some practice I could be up to full speed.
(Be sure to view the entire video.)

Watch the hands. I pick landmarks on the onion for the first slices. Peeling is the easy part. Now the hard part. The horizontal slices. The first half isn't bad. I never lose contact with it. I use the edge of my cutting block as a guide for height. First slice, one knuckle, the second slice two. But you have to keep your blade level. I practiced the grip before doing it to remember how it felt in my hand. The second half is kinda scary. I have to retrieve it. I wasn't sure if the halves were the same size so I had to assume they were and go for it. Still fumbled a bit. Again using the edge and knuckles for height. The vertical cross slices are a piece of cake.

I just watched episode one of Top Chef. The knife skills test. Pfffft, I'd smoke'em blindfolded)
Posted by Salty at 6:16 AM 3 comments:

So the phone rings the other day and I see on the caller ID that it's the Milwaukee Journal/Sentinel. I think to myself it's either going to be someone selling something or the food critic. As soon as the person on the other end started talking I new it wasn't an intern working the phone banks. I immediately became nervous. She quickly informed me that we made Milwaukee's Top 30 Restaurant list. I took a breath and relaxed, then I got real happy. It's been ten years since we've opened. It's been ten years of cussing under my breath when that list came out. The late great Dennis Getto, former critic at the Journal gave us a "worth the drive" blurb in conjunction with the top 30 once but it's not the same. He also gave us 3.5 stars out of 4. We were certainly worthy but I always felt that they may have considered us a Racine restaurant and not a Milwaukee restaurant, despite being only 30 easy minutes from downtown Milwaukee. (The route I take doesn't contain a single traffic light between downtown and the restaurant) So when Carol Deptolla informed me that we made the list it was a big deal. It means a lot to Patrice and I. I thank her for her insight-fullness and grasp of what dining is all about. Her intro to the piece was if I wrote it.

I'd like to give the staff credit for their professionalism, patience and perseverance. They make this restaurant what it is. Whether they believe it or not, I love those guys.