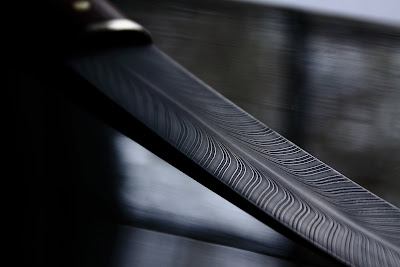 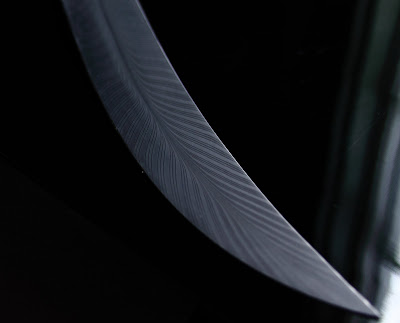 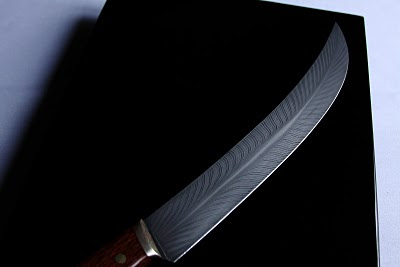 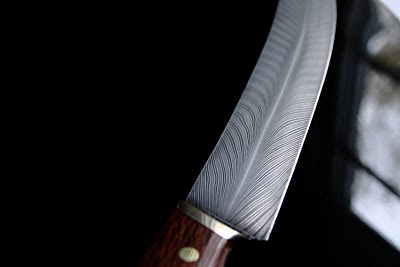 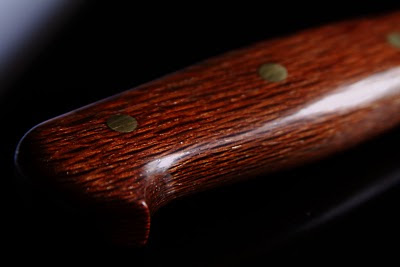 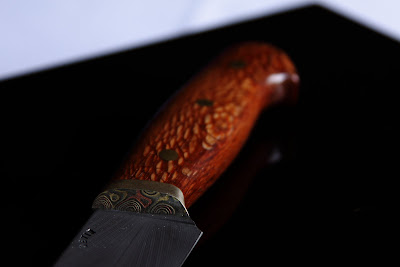 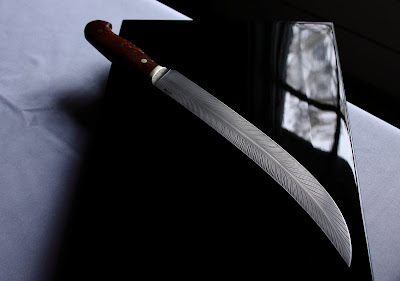 Wow is all I can say. 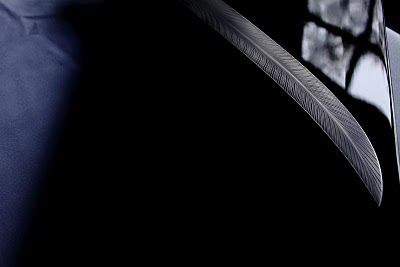 It's called a feather pattern for a reason. 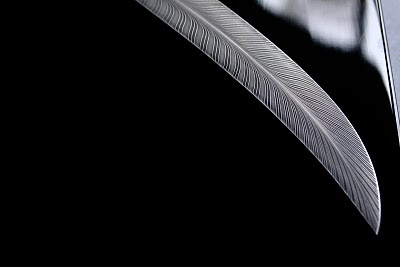 Posted by Salty at 3:39 PM 3 comments: Links to this post

Posted by Salty at 3:40 AM No comments: Links to this post

Posted by Salty at 3:39 AM 2 comments: Links to this post

Posted by Salty at 3:38 AM No comments: Links to this post

(For those who don't know, Bob Kramer is probably the most famous knife maker in the world. People wait up to three years for one of his knives.)

After a 30 month wait I received the call, "You are up and what knife do you want?" I knew I wanted the Meji style but wasn't sure on wood or Damascus pattern. I'm not a wood guy so I really didn't think about it much. I have a snakewwod handle I really like so I went with that.

I asked Bob for the new chevron pattern. He said it wasn't available at the old price. I offered to make up the difference but he just said "it's not available". He then suggested the steel he was currently working on. He described it as having "intrinsic or inherent" qualities, I'm not sure which one he used but I understood. He said it was the "Northwest" pattern. (It's number 18 on his list.) I agreed and ordered a 240 Meji style "chef's" knife with snakewood handle and Northwest pattern Damascus.

At first I was a little underwhelmed. The snakewood was darker than expected and not as dramatic as I envisioned. Bob described the Damascus pattern as being "subtle" with leanings toward the Japanese style. I agree, it's subtle (for a Kramer) but as I use it the pattern is beginning to stand out and is becoming more dramatic.

The knife is big and has different geometry from what I'm currently using, (I've included a photo of it compared with my Mizuno 240.) obviously it has a big wide blade. If I were to make any suggestions in design it would be to make it thinner and narrower but that's just me. At first I was worried about the edge being too thick but after putting my usual edge on it all worries disappeared once I started using it. It performed beautifully. I hate to say it but I was actually surprised. I really didn't expect it to perform. I was planning on occasional usage but once I started cutting stuff up I couldn't stop. The knife feels good. The handle is large, it's at least if not bigger than a shigefusa. When using a pinch grib there's at least two inches of handle left over. I like a large D shaped handle and it fits the bill perfectly. The snakewood is indeed darker than expected but I'm beginning to appreciate the subtle elagance to the handle. The fit and finish of the handle is perfect. I love the way he integrates the Wa handle into the blade. The knife is balanced beautifully, right at the machi. It's a big heavy knife but it's not noticeable because of the design and balance.

The spine is thick but tapers nicely to a thin tip. The blade seems to have a right hand bias and a very slight convex front and concave back. Very little, you can only tell by light reflection. The edge isn't super thin but thin enough. I work near the tip often and this knife has a nice thin one with a solid blade behind it.

It came fairly sharp out of he box but had difficulty push cutting "ticket" paper. I put my usual edge on it and put it to work. The wide blade has some pluses and minuses, When dicing an onion the cut pieces tend to climb the blade, although the size of the knife helped in dicing a big fat onion. A smaller onion and I'd work more at the tip. It flew through everything I cut. I was especially surprised when I did the tomato test. Holy $hit! Until now the Hattori KD performed the best on the tomato. The Kramer flew threw it. As I'm cutting it I'm waiting for the usual drop in edge quality but it never happened. That tip works freakin great. I haven't tried it as a slicer yet but I think it will be this knife's shortcoming.

Considering the environment I work in and my style of cooking this knife is perfect. It performs and it's tough.

The choil or "agi" is rounded and smoothed as well as the spine. My only complaint is a hill or slope coming down from the bolster on the right side of the blade. It's right where your index finger would be if you used a choked up pinch grip. I asked Bob about it and his response was

"I believe the "hill" you mention is the transition between the land or bolster area and the blade.Although I strive to make each blade "perfect" this is rarely attainable. Wabi Sabi is a Japanese phrase which describes an aesthetic where there is beauty in imperfection or asymmetry. I wholeheartedly embrace this idea. I believe this "hill or ridge falls in this category of wabi sabi. To me the blade felt good and I didn't want to sacrifice the extra thickness in that area for a perfect "line" and it felt good in my hand so I left it. As with all my work I want you to feel good about the blade and if this is not acceptable I'll happily make another. Each blade is unique and I learn something new pretty much every time I make a knife."

I declined. Once I use a knife it's mine and this knife rocks. I'm a big believer in "a bird in the hand".

A good way to describe it is the Japanese gyutos are like sport bikes and the Kramer is a Harley. 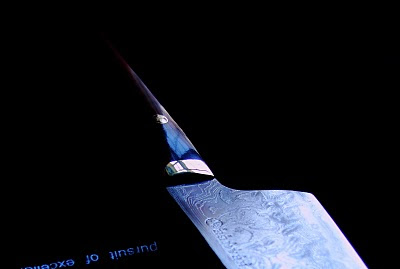 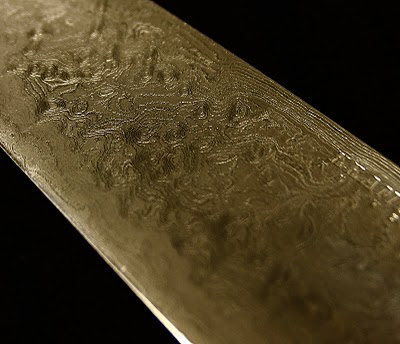 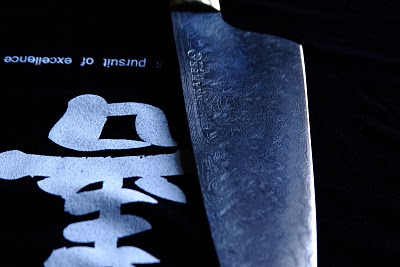 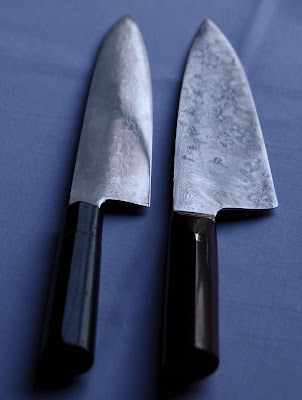 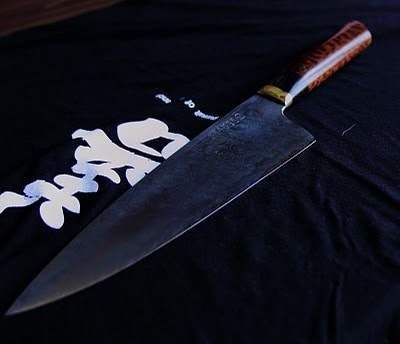 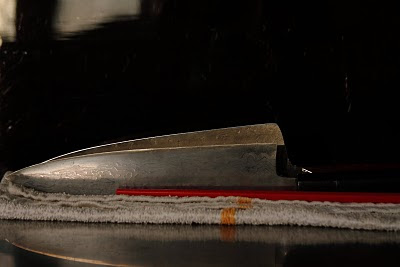 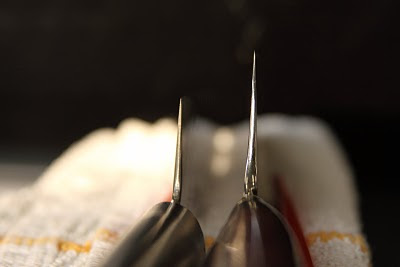 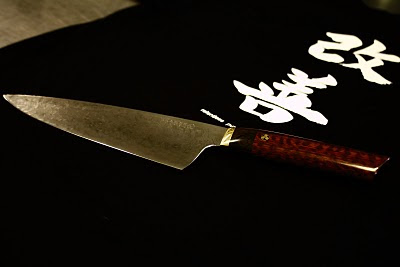 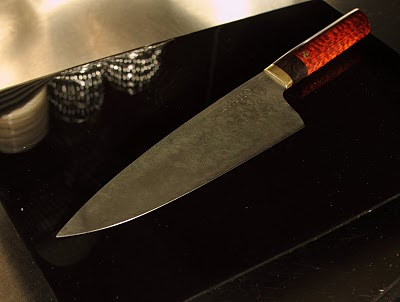 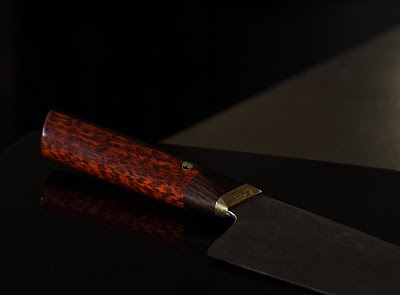 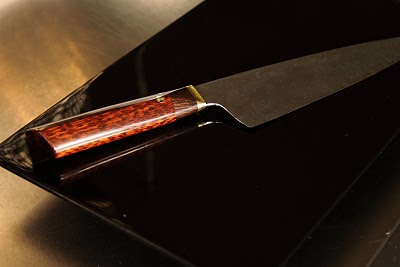 Posted by Salty at 1:33 AM 3 comments: Links to this post

Posted by Salty at 4:24 PM 2 comments: Links to this post

I suggest you mute the sound on the youtube video (lower right hand corner) and play Pepper off the playlist at the bottom right of the blog.


Posted by Salty at 9:37 AM No comments: Links to this post

Keeping it in the "Family"

We've just gone through an almost complete turnover in the kitchen. Corina left for a full time day job and school, Javiar got an attitude, Victor got pissed off at Robert and walked out in the middle of a Saturday night, Juan left four days later and our other Juan couldn't make it to work one day because of a job interview. You can figure how that ended up.

Robert, a Milwaukee boy suggested he call "some of his guys", I said no fuckin way, I don't need some tattoo'd wanna be Bobby Flay's "A-rose-Aing" the fuckin scallops! I told him I got my guys here in town, I like to "keep it in the family", guys who know how I operate and I know how they operate.

Within a week all the positions were covered with seasoned pros. All of whom have worked for me in the past, not for short periods of time but for multiple years. I've learned not to burn bridges with the "good ones".

I know some people wonder how I get these guys back knowing how demanding I am. The ones that wonder haven't worked in a kitchen. They haven't been in the trenches. No use in explaining.
Posted by Salty at 7:12 AM 2 comments: Links to this post